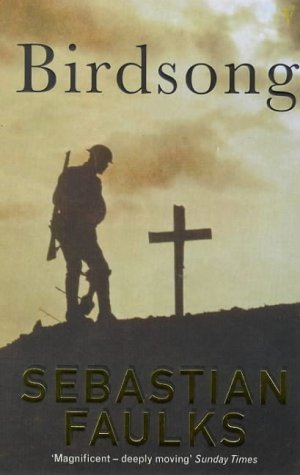 Sebastian Faulks is a British best-selling novelist here in the UK and this is the first book, written by him, that I read.

It’s a powerful story of love and war. The part about love was very sensual and intense.

The part about war showed the horrors in detail and in a realistic manner, so much so that I could identify with the human despair.

The writing style was so descriptive that I felt like I was watching a film.

It triggered many strong emotions all together that at the end of the book my eyes were wet.

This is a beautiful and moving book and it certainly won’t be the last one by Faulks that I will read.

Published to international critical and popular acclaim, this intensely romantic yet stunningly realistic novel spans three generations and the unimaginable gulf between the First World War and the present.

As the young Englishman Stephen Wraysford passes through a tempestuous love affair with Isabelle Azaire in France and enters the dark, surreal world beneath the trenches of No Man’s Land, Sebastian Faulks creates a world of fiction that is as tragic as A Farewell to Arms and as sensuous as The English Patient.

Crafted from the ruins of war and the indestructibility of love, Birdsong is a novel that will be read and marveled at for years to come.