I Think Therefore I Am 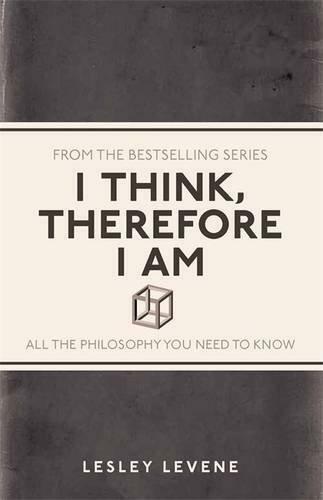 I found this book in the bookshop of the British Museum. I read the first two lines and I was hooked. It’s about the history and the thoughts of the most well-known philosophers. It does this following a chronological timeline, from the Presocratics, and specifically from Thales of Miletus (c. 624 – c. 545 BC) who, according to Aristotele, was the first real philosopher, right up until those of recent days.

The very fact that this book ranges over some two and a half thousand years suggests the answer: that there is no answer.

This is how the book starts.

The above two lines made me think that humans have always (well, since philosophy was born at least) been asking themselves who they are, what their role in the world is, what the world is, and similar questions, to try and understand life and its purpose: same questions, but still no answers. Or we could better say that philosophers give the answer that subjectively makes more sense for them, which obviously is not THE answer, otherwise you wouldn’t explain so many different philosophical schools of thought.

We will probably never have an answer. Perhaps we’re simply not programmed to be able to find out what it is. Instead, what we know for certain is that the unknown and the uncertainty of it makes us uncomfortable. In my opinion, that’s when the concept of God comes to help, that’s a possible answer that gives us comfort.

So this is what religions are, I think – an answer to something we don’t know. As the great Italian astrophysicist Margherita Hack used to say: all of the natural phenomena used to be explained with gods, the more the scientists discovered the more the number of gods reduced.

There are an estimated 10.000 distinct religions worldwide, and notice that they are all geographically and temporally relevant. Geographically – if you’re born where I’m from, you’re a Catholic. Temporally – if you were born in the exact same place more than 2000 years ago, you wouldn’t have been a Catholic, instead, you would have believed in more than one God, given the Greek influence.

As to the gods, Protagoras said he had no way of knowing whether they existed or not, or what form they might take, the subject being too obscure and life too short.
With his emphasis on the importance of subjectivity in how we understand the universe, Protagoras started the shift away from natural philosophy towards an interest in human values. And it was in response to Sophists like him that Plato began his search for trascendent, eternal truths that underpinned the human experience.

We have no evidence that God exists or doesn’t exist. It’s a question of faith – precisely a belief without evidence. So, the first two lines of the book were very provocative for me: there is no answer and using religion as a solution doesn’t convince me.

While I was reading, I remembered how much I loved philosophy when I was in high school, despite my professor having a very soporific voice. Actually, perhaps this was the reason I loved it! 🙂

What makes philosophy, together with history, attractive for me is that they help to give perspective on the main questions of life. Knowing that the same questions have been there for a very long time before we were born and knowing that the answers changed, depending on the time, location and circumstances, is what gives the answer to all: there’s no absolute, everything is relative and subject to change.

You can never step into the same river twice for the simple reason that the water you dip your toes into on the second occasion is not the same water you touched the first time round.

Interestingly, the more I was getting closer to reading about philosophical thoughts of our times, the more they made sense for me, simply because I’m a daughter of our times. My way of thinking, my culture and my subconscious are the result of the time and the place in which I was born and I currently live.

There are anyway some thoughts of the past that are still very much relevant today after 2000 years, like Epictetus.

Epictetus teaches that the purpose of philosophy is to […] achieve happiness. The starting point must be self-examination, with an assessment of which things in life can be controlled and which cannot, since unhappiness is caused by worring about things over which we have no power.

Of all the philosophers, the history of Epictetus made my jaw drop as he was born as a slave in what is part of Turkey now, went with his master to Rome, at some point gained his freedom and then began to teach. Finally, he settled in Greece where he opened his own highly successful school. Basically, a “self-made man”!

This book runs very quickly through the history and the thoughts of some of the biggest names in philosophy. Whilst it is very informative and definitely, a bit thought stimulating, I think the reader should manage their expectations – in my opinion, the book doesn’t go as deep as it should in order to give you “all the philosophy you need to know”, as its subtitle promises. Instead, it’s a quick read, just a brief summary and introduction to philosophy. Overall, not a bad book that I’d probably recommend to someone who is starting to get interested in philosophy.

Title: I Think, Therefore I Am: All the Philosophy You Need to Know
Author: Lesley Levene
Year first published: 2010

Philosophers certainly like to make life sound awfully complicated. But is philosophy really so complicated? And is it really as irrelevant as it sometimes seems?

“I Think, Therefore I Am” is the ideal way to take the fear out of philosophy. Written in an accessible and highly entertaining style, it explains how and why philosophy began, and how, from Greek democracy to Communism, the ways in which we live, learn, argue, vote and even spend our money have their origins in philosophical thought.