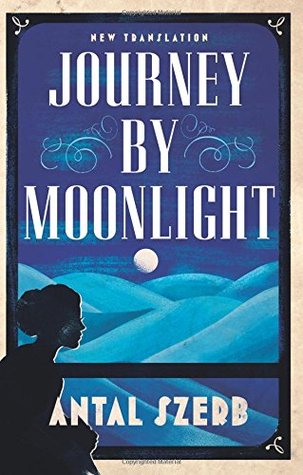 This book is special to me, just knowing that I was going to read it at the end of my day made my day happy.

A classic of Hungarian literature (Utas és Holdvilág), it was written by Antal Szerb, one of the major Hungarian writers of the 20th century. His works have been translated into many languages.

Because of his Jewish background, he faced strong hostility and persecution, until he was atrociously beaten to death by the guards of a concentration camp in 1945, at the age of 43. He was buried in a mass grave.

The main character of the book, Mihály, is Hungarian and on his honeymoon in Italy with his wife Erzsi.

When you think of a newly married couple, you expect them to be making plans and looking towards the future together. Here, however, your expectations would be disappointed because it is the exact opposite that happens.

Mihály struggles to cope with reality, which is being an adult who doesn’t want to conform to the rules and expectations of the middle-class world in which he finds himself. So, he is all of a sudden without his wife and starts to wander through some of the most beautiful regions in Italy.

In his vagabond journey, his mind, often projected towards the past, is lost in nostalgia for his youth and in contemplation of death.

He wants to escape the constraints of a “normal” life, he’s trying to run away, he wants to feel free. Sometimes he feels happy because he thinks he’s been able to escape his dreary and suffocating commitments that he has in Hungary, while some other times he cannot but confront reality and this makes him fall into despair.

Most of what happens is nearly absurd, the characters in the book are mainly non-conformists and the story is wild. While I was reading it, I had the feeling that the story was not real but a dream, however, at the same time, the description of the places was very detailed. In fact, what struck me most about this book was the elegant writing style.

I enjoyed that it was set in my home country, Italy. I’ve learned so many things about it, I was fascinated, for example, to learn about the “gate of the dead”.

You should know that in Gubbio, these medieval houses have two gates. An ordinary gate for use by the living and, next to it, a second, narrower one for the dead. They only open this gate when they carry the deceased out in a coffin. Then they wall the gate up again so that the dead can’t return. According to them, the dead can only re-enter where they’d left. This gate isn’t even at street level, but a metre higher, so that they can pass the coffin out to people standing in the street.

I was so curious to know if this was a result of Szerb’s imagination that I googled it. He wasn’t imagining it all, it’s as he says!

Apparently, the translation into English from the original Hungarian by Len Rix is masterful, and I’m curious to see how it’s been translated into Italian too.

This book is about a man who goes on a personal journey hunting for the meaning of life. Thought by some to be a novel of “magic realism“, I think it’s a psychological novel too. Deep, intelligent and splendidly written, it’s a work of art that stands out from the crowd.

Some of My Favourite Quotes From the Book:

And while there is life there is always the chance that something might happen.

The matter could in fact have been resolved quite simply if all those round the table had been equally intelligent. But in this life that is rarely given.

“You have no illness,” said the doctor, “just some sort of extreme exhaustion. What did you do to tire yourself out so much?”
“I?” asked Mihaly thoughtfully. “Nothing. I lived.”

The nature of civilisation everywhere was such that, even with the Greeks, it diverted people’s minds away from the reality of death.

In London November isn’t a month, it’s a state of mind.