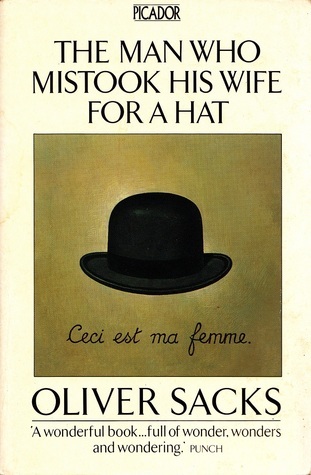 Being passionate about the brain and how it works, I had heard a lot about the author of this book.

Oliver Sacks was a British neurologist who moved to the United States, where he spent most of his career. He was the author of numerous and best-selling books that mainly include the cases of his patients, who were people with neurological disorders. He died in 2015 at the age of 82.

Before reading this book, I had watched a film, with Robert De Niro and Robin Williams (who stars as Oliver Sacks), based on one of the author’s books, “Awakenings“. I really liked the film and I highly recommend watching it. Sacks seemed like a caring and enthusiastic doctor.

Because of the idea I had made of him in my mind after watching the film, and given his reputation, I had high expectations; however, I was left a bit disappointed by the end of this book.

While the title is brilliant and intriguing, and the cases of his patients are very interesting, I found it difficult to follow the text as it was too technical. So, unfortunately, due to its writing style, I didn’t enjoy reading this book. Also, part of the terminology used is outdated and disturbing; for example, he often calls his patients “retarded”, however, I appreciate the book was written almost 40 years ago when this term was not considered offensive.

I don’t feel I’ve learned anything about the brain as it was difficult for me to remain engaged and the only reason I continued to read it (and gave it three stars) was because of the reputation of the author. “Maybe it’s just me who isn’t able to appreciate this”, I kept repeating to myself.

I don’t recommend reading it but I’m willing to try reading another of Sacks’ books – let’s see if perhaps it’s just this book that is not for me.

It sounded like a promising book, but I found it unsatisfying. While I didn’t feel any enthusiasm in reading it, I was definitely fascinated, by reading the accounts of Sacks’ patients, to be constantly reminded how magnificent and complex the human brain really is.

In his most extraordinary book, Oliver Sacks recounts the stories of patients lost in the bizarre, apparently inescapable world of neurological disorders. These are case studies of people who have lost their memories and with them the greater part of their pasts; who are no longer able to recognize people or common objects; whose limbs have become alien; who are afflicted and yet are gifted with uncanny artistic or mathematical talents. In Dr Sacks’ splendid and sympathetic telling, each tale is a unique and deeply human study of life struggling against incredible adversity.