The Universe in a Single Atom (by the Dalai Lama) 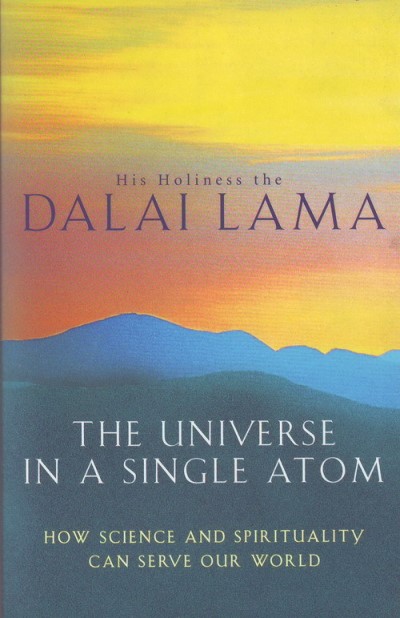 I don’t belong to Buddhism, but I have the highest admiration for its maximum authority, Tenzin Gyatso, the Dalai Lama XIV and, specifically, for his intelligence and openness towards others, including those who think differently from him. I always love listening to what he has to say, and I truly think his life enriches our world.

This book is a confirmation of the consideration I have of him.

The Dalai Lama’s genuine interest in science is well known and these pages are an opportunity to reflect on a possible connection between science and spirituality. In particular, the Dalai Lama thinks that these two could even be complementary because they are both in search of the truth, just from different perspectives – religion has a subjective (first person) view while science has an objective (third person) one.

For example, the connection between the neurosciences and Buddhism about consciousness and mindfulness is astonishing. In fact, Buddhism is often referred to as the “science of the mind.”

In his explorative journey to compare science and spirituality, I was impressed by his humility when he said that, given the recent scientific discoveries, some Buddhist teachings are archaic and should be modernised.

The final part about the new genetics was very thought-provoking. However, the part on science in the entire book was too “scientific”. So, while the topic was fascinating, the reason it doesn’t have more than three stars is that for me it was too difficult to follow so I wasn’t able to fully engage with the topics being discussed. I don’t think this book is for everyone.

I’m not left with a lot to remember from this read apart from the reminder of what a clever person its author is… far too clever for me!

Title: The universe in a single atom. How science and spirituality can serve our world.
Author: Dalai Lama XIV
Year first published: 2005

Galileo, Copernicus, Newton, Niels Bohr, Einstein. Their insights shook our perception of who we are and where we stand in the world, and in their wake have left an uneasy coexistence: science vs. religion, faith vs. empirical inquiry. Which is the keeper of truth? Which is the true path to understanding reality?

After forty years of study with some of the greatest scientific minds, as well as a lifetime of meditative, spiritual, and philosophic study, the Dalai Lama presents a brilliant analysis of why all avenues of inquiry—scientific as well as spiritual—must be pursued in order to arrive at a complete picture of the truth. Through an examination of Darwinism and karma, quantum mechanics and philosophical insight into the nature of reality, neurobiology and the study of consciousness, the Dalai Lama draws significant parallels between contemplative and scientific examinations of reality.

This breathtakingly personal examination is a tribute to the Dalai Lama’s teachers—both of science and spirituality. The legacy of this book is a vision of the world in which our different approaches to understanding ourselves, our universe, and one another can be brought together in the service of humanity.