This Book Will Make You Think 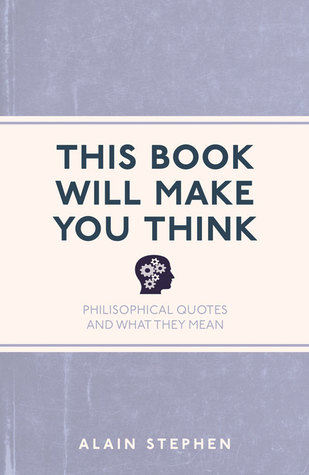 While I was visiting the bookshop at the British Museum, I came across this book with such an intriguing and promising title.

One of the things that makes me consider a book a good one is that it makes me think, so boom! I wanted it.

It’s a very brief introduction to some philosophical thoughts. Each chapter starts with a famous quote, which is then followed by a short section that covers historical information and the background of the philosopher who came out with that thought. Finally, it explains what the philosophical quote means, but mind you, it’s generally done on on a very superficial level – it doesn’t go into any analysis. For me, this represents a struggle as I can’t remember and therefore learn things that it’s not explained why they are the way they are.

However, it was still an enjoyable read that indeed made me think a little bit.

On Religion and Faith

If God did not exist, it would be necessary to invent him.

This quote reminded me of Margherita Hack, an Italian astrophysicist, who I liked to listen to. She was convinced that the concept of God is used when we cannot explain natural phenomena. I agree with her – when science doesn’t provide the answer, faith comes to the rescue.

The function of prayer is not to influence God, but rather to change the nature of the one who prays.

In my opinion, prayers can be considered thoughts and our thoughts influence our feelings, so if we use syllogism, the prayer influences the feelings of who is praying.

Grant me chastity and continence, but not yet.

St Augustine was converted to Christianity by St Ambrose in Milan. There’s a very lovely area in Milan where you see these two names quite a lot on the streets, bars, churches, etc., even the two underground stations there are named after them.

Being dead will be no different from being unborn – I shall be just as I was in the time of William the Conqueror or the dinosaurs or the trilobites. There is nothing to fear in that.

Death is nothing to us, since when we are, death has not come, and when death has come we are not.

These two quotes above too reminded me of Margherita Hack, when she said “I have no fear of death. While we are here, death isn’t with us. When there is death, I won’t be here.”

The likelihood that your acts of resistance cannot stop the injustice does not exempt you from acting in what you sincerely and reflectively hold to be the best interests of your community.

What an inspiring and motivating thought!

In the 1970s, Sontag published On Photography where she argued that the dangers of a visually saturated society are that things are experienced through images instead of personal sensations. Little did she know that six years after her death, modern society would have given birth to Instagram!

Not an enlightening read but overall interesting as an introduction to some philosophical thoughts. The bite-size chapters, each one just a few pages long and not linked to each other, seemed like a shopping list. However, they make the book easy to read, and something that you can just pick up and put down again, so I recommend it to those who are new to philosophy and don’t want to explore the topics too deeply.

Title: This Book Will Make You Think – Philosophical Quotes and What They Mean
Author: Alain Stephen
Year first published: 2013