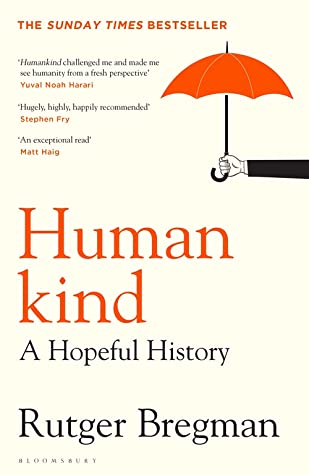 Do you think humans are selfish, untrustworthy and dangerous creatures? If so, do yourself a favour and read this book.

The core message in this book is that most people, deep down, are good-hearted. A perfect read in the current times.

The author, Rutger Bregman, is a historian whose optimism is energising. He tells lots of effective stories and provides evidence from psychology, sociology, anthropology and archaeology.

He starts developing his theory with a view on the “philosophical boxing ring” that sees two opposite opinions about human nature:

Hobbes believed that before our civil societies existed, humans were constantly at war. Every person had a natural right to do anything one thought was necessary for preserving one’s own life, and life was “solitary, poor, nasty, brutish, and short” (from his book Leviathan).

Hobbes’s view was later challenged by Rousseau who thought that instead, it’s the modern society itself that is the problem.

Who do you think is right? The author gives his answer to this question in his book.

I had already studied these two “big names” in high school and I remember supporting fervently Hobbes’s theory. We as a society need to be organised with rules, otherwise, chaos will prevail.

A simple but clear example that I kept reminding myself of was that we are free to drive on a street and the reason there’s the middle line (i.e. the rule) between the two lanes is to allow everyone to exercise this freedom.

So, paradoxically, to be free we need to give up some of our freedom – we cannot drive in the other lane unless it’s for exceptional reasons (for instance overtaking the car in front of us or an emergency ambulance, etc) but these are already decided and regulated in advance.

What happens next and specifically to whom do we give our part of the freedom that we are renouncing? How are they going to manage it? Who’s going to check that they won’t abuse it?

The theory of separation of powers came in aid. Based on it, in order to safeguard people’s liberties, the principal powers of a State should be clearly separated and independent from each other.

It all makes perfect sense, doesn’t it?

However, after reading this book, I feel that my belief in this theory has become a little bit vulnerable, which is not necessarily a negative thing. Quite the opposite, it actually gives me a broader view of how things stand.

What I totally agree with the author’s views are his thought about the news and its influence on our lives. I share below with you plenty of quotations from the book regarding this.

Surprisingly, towards the end of the book, given the type of reading, I wasn’t expecting at all that the author would mention Matthieu Ricard, a Buddhist monk reported in the press as the “happiest man in the world”. Bregman gave meditation a shot only to conclude it hadn’t worked for him. I’d suggest he reads “A Monk’s Guide to Happiness” before giving it up completely.

In conclusion, this is an interesting, informative, reflective and cleverly written book that has triggered many questions and planted a few thoughts in my mind that I’ll probably cultivate in the future.

I must say it didn’t change my mind. When I see what’s happening in Ukraine my attitude is still of defensiveness and suspicion towards humankind and perhaps it takes more than a book to change your life-long beliefs.

However, I welcome the author’s point of view because it encouraged me to think about human nature from a different perspective. This contributes to developing my critical thinking, which is one of the freedoms that I try to protect the most. It is especially for this reason that I highly recommend reading it.

“Imagine for a moment that a new drug comes on the market. It’s super-addictive, and in no time everyone’s hooked. Scientists investigate and soon conclude that the drug causes, I quote, ‘a misperception of risk, anxiety, lower mood levels, learned helplessness, contempt and hostility towards others, [and] desensitization’. […] That drug is the news.”

Quote from Jodie Jackson, Publishing the Positive. Exploring the motivations for and the consequences of reading solutions-focused journalism

“Over the last several decades, extreme poverty, victims of war, child mortality, crime, famine, child labour, deaths in natural disasters and the number of plane crashes have all plummeted. We’re living in the richest, safest, healthiest era ever. So why don’t we realise this? It’s simple. Because the news is about the exceptional, and the more exceptional an event is – be it a terrorist attack, violent uprising, or natural disaster – the bigger its newsworthiness.”

“One of the biggest sources of distance these days is the news. Watching the evening news may leave you feeling more attuned to reality, but the truth is that it skews your view of the world. The news tends to generalise people into groups like politicians, elites, racists and refugees. Worse, the news zooms in on the bad apples.”

“The news, according to dozens of studies, is a mental health hazard.”

“But the people behind Facebook, Twitter and Google know you well. They know what shocks and horrifies you, they know what makes you click. They know how to grab your attention and hold it so they can serve you the most lucrative helping of personalised ads.”

“If we exercise to keep our bodies in shape, why not to do the same for our minds?“

“An old man says to his grandson: ‘There’s a fight going on inside me. It’s a terrible fight between two wolves. One is evil–angry, greedy, jealous, arrogant, and cowardly. The other is good–peaceful, loving, modest, generous, honest, and trustworthy. These two wolves are also fighting within you, and inside every other person too.’ After a moment, the boy asks, ‘Which wolf will win?’ The old man smiles. ‘The one you feed.“

“People are social animals, but we have a fatal flaw: we feel more affinity for those who are most like us.”

“Any time we crossed paths with a stranger we could stop to chat and that person was a stranger no more.”

The real-life ‘Lord of the Flies’

Amongst the many stories told in “Humankind”, Rutger Bregman writes about the real-life experience of six boys shipwrecked on an island for more than 15 months in the 1960s. It’s a story of friendship and loyalty, opposite to the fictional book “Lord of the Flies“.

From the bestselling author of Utopia for Realists.

It’s a belief that unites the left and right, psychologists and philosophers, writers and historians. It drives the headlines that surround us and the laws that touch our lives. And its roots sink deep into Western thought: from Machiavelli to Hobbes, Freud to Pinker, the tacit assumption is that humans are bad.

Humankind makes the case for a new argument: that it is realistic, as well as revolutionary, to assume that people are good. When we think the worst of others, it brings out the worst in our politics and economics too.

In this major new history, internationally bestselling author Rutger Bregman shows how believing in human kindness and altruism can be a new way to think – and act as the foundation for achieving true change in our society.

It is time for a new view of human nature.