Love Letters of the Great War (edited by Mandy Kirkby) 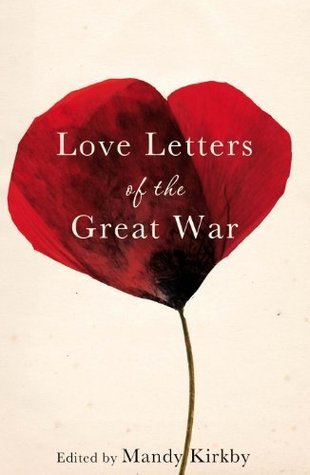 With this book, I took a glimpse at some private correspondence that was exchanged during the WW1. Lots of different strong emotions were given voice by these letters, so sometimes I felt like I was intruding on the privacy of those who wrote and received them.

My favourite one was written by the primary school teacher Marin to his wife Marguerite. A few months after Marin had joined the army in 1914, Marguerite gave birth to their first child, a daughter. His letter is just an explosion of pure love. Here is an extract:

Keep my letters, if I were to not come back she can read them later, and she’ll know that her daddy loved her very much.

The most jaw-dropping one was written by a wife to her husband, a prisoner of war. It starts like this:

Dear Husband! This is the last letter I am writing to you, because on the 24th I am going to marry another man. Then, I don’t have to work any longer.

The most distinct letter was by Winston Churchill in 1915. On the envelope was written “To be sent to Mrs Churchill in the event of my death”. It closes like this:

This book gave me perspective. It made me think about the easy and comfortable life we live now, and that we even dare to complain!

Also, I reflected on the fact that we don’t stop to think and handwrite letters anymore. What we now do is write quick texts, the content of which is even reduced by emojis. We react more than we think.

I loved this book because, while I was reading it, I felt that life is rich and I was reminded of how needed and important relationships are, especially the ones based on love.

I recommend it if you want an easy-to-read but at the same time emotional book.

From the private papers of Winston Churchill to the tender notes of an unknown Tommy in the trenches, Love Letters of the Great War brings together some of the most romantic correspondence ever written.

Some of the letters collected here are eloquent declarations of love and longing; others contain wrenching accounts of fear, jealousy and betrayal; many share sweet dreams of home.

But in all the correspondence – whether from British, American, French, German, Russian, Australian and Canadian troops in the height of battle, or from the heartbroken wives and sweethearts left behind – there lies a truly human portrait of love and war.

Each of the letters, many of which have never before been published, is introduced by a brief piece about the characters, some of whom were parted for ever by the tragedy of war; others reunited.

A century on from the start of the First World War, these letters offer an intimate glimpse into the hearts of men and women separated by conflict, and show how love can transcend even the bleakest and most devastating of realities.