Sapiens: A Brief History of Humankind (by Yuval Noah Harari) 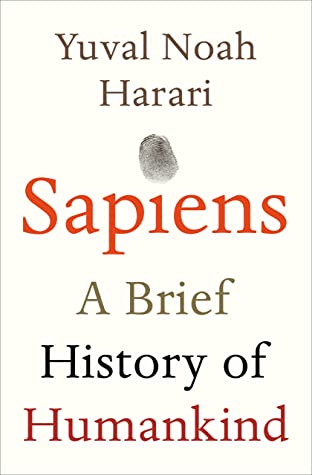 I was really looking forward to reading this book and I had high expectations given that there had been a lot of hype around it. Not only did it not disappoint, but it also even exceeded my expectations.

The author, Yuval Noah Harari, is simply a genius. He’s a university professor of history in Israel, so the book is written by somebody who has qualified knowledge. He has made an entire course about the history of humankind too which is available for free on YouTube.

In the book, I was expecting a dry chronological timeline of historical events, as they do in school, but this is something else. I’m in awe of the author’s knowledge and his ability to pass it on to other people. I also appreciated the presence of images, cleverly inserted throughout the text.

The book gives perspective and a bird’s eye view of humankind. I was expecting to learn about our past only, while interestingly this book helped me understand more about our present. It’s a clear example of how history widens our horizons.

Yes, this book comes with lots of opinions too, but I generally found myself agreeing with the author’s views, so I consider it like my guiding star.

My favourite chapter was the law of religion. It made me reflect on the fact that religion, as we know it today, is a very young concept, compared to the whole history of humanity. I felt like my mind was expanding in wonder when I was reading it. Especially when the author classifies liberalism, communism, capitalism, nationalism and Nazism as religions. I read this twice to experience the same feeling.

I’ve learned many things and amongst these, I think the one that struck me most is the crucial impact that vitamin C had on the course of some historical events.

A mind-opening, remarkable and provocative book. I loved every bit of it, and I couldn’t love it more. It’s probably the most certain 5-star rating I’ve ever given to a book. A must-read for everyone. Actually, it should be mandatory in schools. I will re-read it one day and I will definitely read all of the books written by Yuval Noah Harari.

A significant number of human cultures have viewed homosexual relations as not only legitimate but even socially constructive, ancient Greece being the most notable example.

Biology enables men to enjoy sex with one another – some cultures forbid them to realize this possibility. Culture tends to argue that it forbids only that which is unnatural. But from a biological perspective, nothing is unnatural. Whatever is possible is by definition also natural. A truly unnatural behaviour, one that goes against the laws of nature, simply cannot exist.

Today religion is often considered a source of discrimination, disagreement and disunion. Yet, in fact, religion has been the third great unifier of humankind, alongside money and empires.

There are no gods, no nations, no money and no human rights, except in our collective imagination.

Religion can be defined as a system of human norms and values that is founded on a belief in a superhuman order.

You could never convince a monkey to give you a banana by promising him limitless bananas after death in monkey heaven.

Polytheism is inherently open-minded, and rarely persecutes “heretics” and “infidels”.

The average Christian believes in the monotheist God, but also in the dualist Devil, in polytheist saints, and in animist ghosts. Scholars of religion have a name for this simultaneous avowal of different and even contradictory ideas and the combination of rituals and practices taken from different sources. It’s called syncretism. Syncretism might, in fact, be the single great world religion.

Commerce, empires and universal religions eventually brought virtually every Sapiens on every continent into the global world we live in today.

Large numbers of strangers can cooperate successfully by believing in common myths. Any large-scale human cooperation – whether a modern state, a medieval church, an ancient city or an archaic tribe – is rooted in common myths that exist only in people’s collective imagination.

Money is the most universal and most efficient system of mutual trust ever devised.

Finally, in 1880, the British government took the unprecedented step of legislating that all timetables in Britain must follow Greenwich. For the first time in history, a country adopted a national time and obliged its population to live according to an artifical clock rather than local ones or sunrise-to-sunset cycles.

100,000 years ago, at least six human species inhabited the earth. Today there is just one. Us. Homo sapiens.

How did our species succeed in the battle for dominance? Why did our foraging ancestors come together to create cities and kingdoms? How did we come to believe in gods, nations and human rights; to trust money, books and laws; and to be enslaved by bureaucracy, timetables and consumerism? And what will our world be like in the millennia to come?

In Sapiens, Dr Yuval Noah Harari spans the whole of human history, from the very first humans to walk the earth to the radical – and sometimes devastating – breakthroughs of the Cognitive, Agricultural and Scientific Revolutions. Drawing on insights from biology, anthropology, palaeontology and economics, he explores how the currents of history have shaped our human societies, the animals and plants around us, and even our personalities. Have we become happier as history has unfolded? Can we ever free our behaviour from the heritage of our ancestors? And what, if anything, can we do to influence the course of the centuries to come?

Bold, wide-ranging and provocative, Sapiens challenges everything we thought we knew about being human: our thoughts, our actions, our power… and our future.